The ride started with a two day trip through the Texas Hill country, over to Pedernales State Park, then to Lake Travis for some sun bathing before dinner at the Oasis.  The return route the next day was east of I-35 all the way home, and we passed through Granger, TX.  And spotted the Anderbock Brew mural.  A Texas brew not yet tasted?  Do tell more!  And that’s when I hit the information wall.

Anderbock Brew,  Est. 1958. The Finest of American Brews.  Never heard of it.  Neither has the internet.  So I called City Hall, spoke with Janine, and found out she had not heard of it.  Really? Work there, live there? So how about I talk with the mayor?  Absolutely!

I telephoned and spoke briefly with Mayor Jerry Lalla on August 14, 2012 and heard that “.. the vacant land was an old mercantile building, which eventually became a beer pub, with the mural painted on the inside.  That building is no longer there, and I am not sure if it was a beer brewed in the pub, or if it was just the name of the tavern.”

Research: I thought next to check Polk or Cole city directories, but just didn’t have time to ride the Roadstar to Austin or Georgetown to do the research.  Back to the internet.  What we find is evidence of a Nu-Icy soft drink mural that pre-dates the Anderbock Mural, and when one knows to look for it, it is visible still.  Also, dated photos on Flickr and other sites pin down the Anderbock Brew mural dates somewhat.

And here is a timeline that might help illuminate the history of the Anderbock Brew mural.

2003 – Texas Chain Saw Massacre filmed in Granger.  Doesn’t apply, but movies are a part of the town history.

t drink, was apparently bottled from the late 20’s to sometime in the 50’s.  When you get to comparing the photos, please note that the adjacent awning is thin and at a low level.  Also, notice the mortar line at the top of the mural – it is the same today.  This photo is by Erik Whetstone, August 15, 2004, and can be found at:
http://www.texasescapes.com/Signs/Gallery-of-Texas-Ghost-Signs.htm#granger

– the first evidence I found of the Anderbock Brew mural.  The awning is in the same position, and the bottle from the Nu-Icy sign is clearly visible, as are the mountains at the base.  The new mural appears relatively fresh in this photo.  The source of this is photo is shown below.  Other photos can be found from January 2008 that replicate this picture. http://www.flickr.com/photos/mickymb/1472369579/   http://www.flickr.com/photos/wilco1900/2461387165/ (2008). 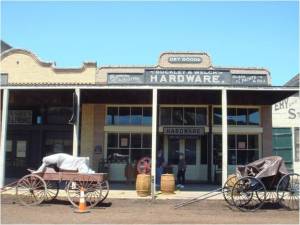 2010 – True Grit is filmed in Granger.  The awning is raised to reflect the design of the movie town, and the mural is enclosed within the Livery & Stable on the set (at right edge of photo). Filming started in March 2010, and the facade(s) were still in place in December 2010.

So much for the movie having anything to do with Anderbock Brew….  photo from  http://joemoconnell.blogspot.com/2010/04/granger-tx-gets-its-dirty-close-up-in.html

2012 – August, the mural is fading, but still vibrant enough to get us to pull the bike over and drag out the camera.  The bottle from the Nu-Icy is about lost, but the mountains in the mural are still visible.